Portland, Oregon, home to The Whiskey Wash headquarters, is a city with a thriving bar and cocktail scene. A number of these operations are run by talented bartenders and also have incredible whiskey collections for you to try. One of the latest entries to this scene, and certainly the one that created a buzz around town, is the Scottish Lodge, crossed out and held by the extraordinary bartender Tommy Klus.

Klus is a longtime veteran of the bar scene, developing cocktail programs for some of the city’s top bars. However, he has long been passionate about scotch and was looking for a place to hang his own hat that would allow him to explore the concepts of a deep whiskey program and also top notch customer service. He feels like he has found both, and more, in his new operation.

To learn more about Scotch Lodge and its owner’s background, we recently sat down with Klus just before he opened the bar to the public. Note that this interview is edited for clarity and brevity. 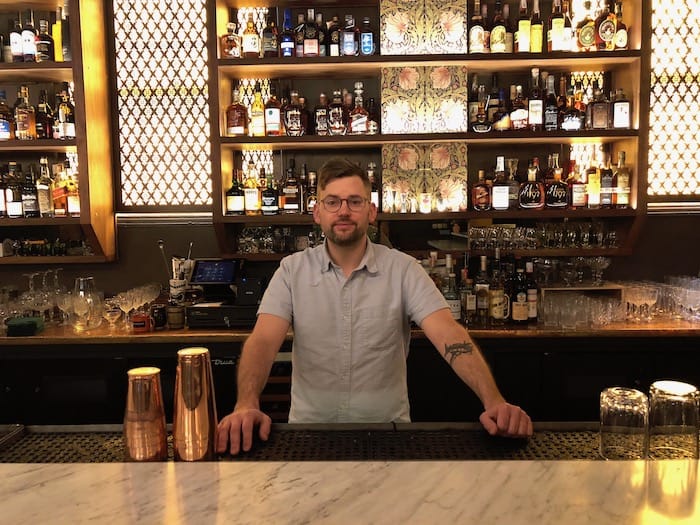 Tommy Klus behind the bar at Scotch Lodge in Portland, Oregon (Image copyright The Whiskey Wash)

The Whiskey Wash (TWW): First let’s talk about your background as a bartender. What was your interest in becoming one?

Tommy klus: Well, we have to go back a long time. I worked in breweries. I kind of started with my dad, who worked at the Henry Weinhard Brewery as the chief engineer. He worked with them for over twenty years before they sold to Miller. So I grew up in that kind of industry, going to the brewery, exploring – it was like nine city blocks and steam tunnels and silos. Lots of mash and kettles. It was a fun place to grow and explore as a kid.

I started working in breweries when I was nineteen. I was already working on the bottling line, had done some light maintenance and done more behind the scenes. I’ve got to take barrels in people’s cars and hear about the parties they’re going to throw, and I’m twenty, maybe twenty-one.

From there I went to Bluehour [another Portland restaurant], and I worked at all the front house positions I could there. Then open Departure, as a bar manager, and install this bar. Teardrop followed – I told them, “I want to learn what you do and just be a sponge and forget everything I learned as a bar manager and relearn it as a bartender Teardrop and do the right thing. your way “.

It was really good for me, I learned a lot. I think at the time the cocktails they were making were super innovative and different. They made their own bitters and things that other bars didn’t. I spent three years there and learned a lot.

Eventually, I was in Scotland doing an internship for Bruichladdich and Springbank, and I spent three months there, two of which in Islay, living in the distillery manager’s house and walking every day to work. I was in love with whiskey. I’m always. I wanted to bridge the gap between what the distilleries do and what the bartenders do and see if there are any parallels.

TWW: Ok so you’ve started or been involved in prolific bars, some of which we haven’t covered yet. You have already mentioned a few. What about the Multnomah Whiskey Library?

Klus: I worked on this project for almost a year before it was opened, on a contract. I was probably working, on average, 100 hours a week, for well over fourteen months. The pitch for the whiskey program was something I wrote to the owners about how I wanted to do it and what it was going to cost and what the categories would look like, what the menu should be, how we wanted to print the menus, and what the menus should look like – everything has been planned in detail.

My first pitch [to the owners] was on the inventory. I didn’t know how much they wanted to spend, so it was modest, and it was refreshing to hear that it wasn’t enough and I needed to add more. I haven’t included everything. I was preparing and choosing, these are the whiskeys that we should present in this distillery, some of the ones that we should try to get out of it.

TWW: So let’s go ahead and talk about Scotch Lodge for a bit. It’s a new animal to you, but at the same time it’s also the culmination of things you’ve developed your skills for. Talk a bit about this thought process behind starting Scotch Lodge, what were you trying to do with creating a whiskey centric bar?

Klus: Scotch Lodge has always been this idea for me which came from the Black Lodge cocktail I created when I was on a Twin Peaks bender watching multiple episodes. Instead of Rittenhouse Rye Whiskey as a base for Black Lodge, at one point I started making it with Bowmore and called it Scotch Lodge.

Before doing this internship I had always imagined what I thought Scotland was going to be, what the smoked whiskeys I was in – where these came from – it was always this dark place. , rainy and smoky with cliffs, big waves, castles. So I had always imagined what Scotland looked like, so Scotch Lodge was more of this idea of ​​a place where Black Lodge is the dream world of the Twin Peaks dream state that Dale Cooper goes to. So here is my whiskey version.

It’s a place for all of that and also to celebrate categories, people, stories, that’s where the name Scotch Lodge comes from.

TWW: What does it take to create a whiskey centric bar like this? What should you do to put the different components of it together?

Klus: Part of that is just being lucky. There is a bit of luck in buying bottles but knowing that I wanted to do something and put things aside with that intention. You have to have content, you have to have education, you have to have people who are interested in the idea. Your team that you put in place, I think most of them I try to talk about the job before I end up hiring, knowing what that is going to involve. I think if you have a really nice collection of bottles and your staff don’t know what they are, how to sell them, it gets lost on the guests.

It is really important that you can meet the guests according to their own level of excitement and enthusiasm. If you can’t, it’s hard to make a solid bar out of it.

TWW: What’s the idea with the whiskey collection you have here?

Klus: I think it’s a good representation of the category, being able to highlight some of these whiskeys that are no longer available, I think that with collectors too, nobody really opens their whiskeys. They go in boxes or they keep them and sell them. I want to open them here and I want you to come and try them. I think the goal is not to put everything on a pedestal, but to be able to open these whiskeys and taste them

TWW: So when the consumer walks through the door here, he will be presented with a list that probably contains whiskeys he does not know. How to educate them on these rarer finds?

Klus: I don’t think we ever seem to force education. I just want you to come in and have a good time. If you don’t know and want to have a conversation, we’ll be happy to engage you.

TWW: Is this the highlight of your experience or is there something you might want to do later?

Klus: I have another idea that I want to do. I think we have a lot of work to do here before we do anything else. Yes, I have a few other ambitions – it was a place for my love of whiskey and, also, a way to give back. I wanted to be able to share this with everyone.

Pick up The Macallan® Rare Cask at the ReserveBar. Buy now!

The former at the Rough Draft Whiskey Bar | Brazil 360

By JOSH McCORMACK Ordering an Old Fashioned at the Rough Draft Whiskey Bar on Northgate comes with a unique twist, thanks to a special brand of bourbon. General manager and co-owner Kyle Meredith said when the bar opened in 2015, he and his team decided to use Buffalo Trace bourbon for their old-school signature. As […]

MARTINSBURG, W.Va. — Nicole Stoneberger recently added Stoney’s Whisky, Wine and Raw Bar to the businesses she owns in downtown Martinsburg. Both Nicole and Jamey Stoneberger, her husband and business partner, have an entrepreneurial spirit. “We knew from the start that we wanted to start a second business sooner or later in the area,” Jamey […]

A new whiskey tasting room could be coming to Naperville. A Naperville resident for 30 years, Bob Many hopes to open HH Shufeldt & Co. in Unit 111 at 1665 Quincy Avenue. Many plan to redevelop the 3,150 square foot space into a workspace, as well as a tasting room that would resemble a late […]